This year we have decided to have a 2 part Tuscan adventure, starting down near Cortona for a week and finishing with almost a week in the Tuscan hills (mini mountains!) near Lucca. I am writing this from our apartment in the hills as there is a biblical thunderstorm outside ⛈⛈⛈, although I guess I shouldn’t be surprised as we are up alongside the clouds!!!

But the holiday so far has been filled with lovely ☀️☀️☀️ , beautiful views and gorgeous food.

Our villa is up a steep hill, amongst the olive trees on the outskirts of the beautiful town of Cortona (famous from the book and film ‘Under the Tuscan Sun’). We actually stayed here back in 2013 and the amazingly restful memories brought us back once more. I took an old and battered copy of an Elizabeth David with me and whilst drinking some Vino Nobile de Montepulciano by the pool I thought I’d make these lovely little men…. 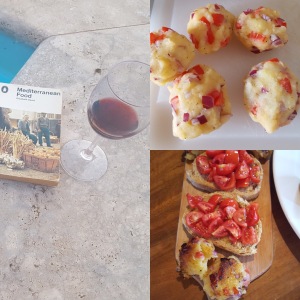 I think that the simplicity of her writing alongside the quality of produce here in Italy has inspired me to take a different view of cooking this holiday. So these potato kofte/ball/keftedes were born….

Potato Keftedes Boil a couple of large potatoes until ready to mash. Leave them to cool and roughly mash with a fork. Season well with salt and pepper. Mix into the potato a small chopped red onion, a medium tomato, deseeded and chopped, and a little fresh chopped rosemary. Add a little glug of olive oil, give it a good mix and shape into balls. Fry in olive oil until golden on all sides.

We ate these hot from the pan with a bruschetta, some cheese, and a lovely cold and crisp Vermentino.

When I make these back home I would be tempted to add some finely chopped green pepper, and maybe swap the rosemary for parsley. They would be excellent with a poached egg on top too!

Montepulciano is one of my favourite places in Tuscany. I love the light in the town, the unfinished facade of the cathedral, and of course the very delicious wine!! On this visit we couldn’t decide where to eat and ended up in this restaurant, Ristorante Degli Archi, surrounded by Australians and a very enthusiastic host…

After the owner made us hold hands at the table and decided we were on our second honeymoon (we were quite scared of his boisterous manner…) we had some delicious seafood: a pasta dish of clams and homemade pesto for me, and a sea bass cooked with potato, cherry tomato and a saffron cream in a cartouche for C. This was an unusual departure for C but he declared it was delicious, and I have to admit to being really jealous, and potentially embarrassing myself by dipping my fingers in the sauce trying to figure out the ingredients so I can recreate at home!

In retrospect we got off lightly with simply having to hold hands at the bequest of the host, others were serenaded in a very loud voice with a repertoire of Italian opera 🤔

Cortona is a busy little town which can get a little overrun with tourists, but in the main square the local men still sit watching the world go by and gesticulating over the days newspaper- football or food?!?

We’ve eaten here a few times before but went a little off the beaten track to a restaurant mainly frequented by locals….

l It is always said that it is a good sign if everyone in the restaurant is local and it was very much the case in Trattoria Dardano. I even managed to order in Italian and no one laughed and we did get what we expected to get! Such simple cooking but with fresh, in season ingredients, and cooked perfectly. C opted for some pasta with a light, piquant sauce. I had some deliciously charred lamb chops with these beautiful roasted veggies. Washed down with some Vermentino…. that was €3 for half a litre!!! It was absolutely lovely 🥂

On our final day we visited 2 tiny hilltop towns which were both quite special. 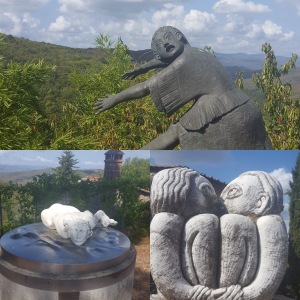 Civitella is breathtaking. The position perched on the top of the hill is spectacular, and when you stand in the ruins of the castle you can not simply understand how it was built! The town itself is pretty, filled with sculptures, flowers and is obviously well loved by those lucky enough to live there. The town has an English connection as there was a terrible massacre during the 2nd world war and the army came to their aid in the aftermath. A truly atmospheric place.

Secondly Lucignano. Slightly bigger, not as pretty (impossible after Civitella), but one of the best meals I’ve eaten! 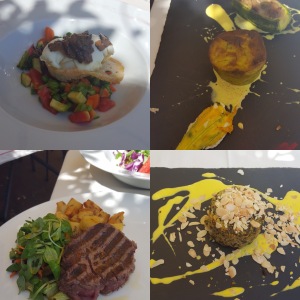 The restaurant has a little terrace on the street but a really pretty large, sunny terrace looking over the valley at the back. The menu was traditional in many respects, with a definite organic slant, but even included a Vegan menu- quite unusual in rural Italy I believe. My starter is at top left- a little salad of raw vegetables dressed with some warming, herby olive oil, topped with a perfectly poached egg and shaved truffles. Simple, I know, but the flavours were utterly perfect. C had the top right starter of a trio of courgette- a ricotta stuffed flower, a kind of frittata and a stuffed courgette with mushrooms. Again not his usual choice but got the 👍👍👍. My main course, bottom right, came from the vegan menu. A courgette, beetroot and chickpea tart with almonds and a saffron sauce. It was amazing! A little plate of wonderfulness! I wouldn’t know how to make it, it had some herbs in that I couldn’t have identified ( I should have been brave and asked the chef) and I enjoyed it immensely. C had some beef that was charred and seasoned perfectly, with some rosemary potatoes too.

I would love to visit this restaurant again 🍷🍅🌶☕️.

So onwards we have gone, leaving southern Tuscany behind for now… 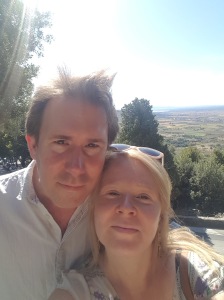