There are 7 years between me and my little sister Marie, so I was off to University as she became a grown up, and then we have lived at opposite ends of the country (or in different countries!) ever since. It is rare to find some time when we can all get together, but we did find it 2 years ago when it was Mam’s 60th- a County Mayo road trip that we will not forget, especially when sat nav tried to get us to drive across a river…. This year Mam had some holiday due and Marie’s fiancée was off on his motorbike (very dramatic scenery through France, Switzerland and Italy) so we made our plans to travel down to Devon: Appledore our destination!

Actually it turns out that Appledore is in our family history- firstly my Mam’s brother, Uncle Bill, had worked here in the 70’s when the dry dock was constructed, and my Dad’s family would travel here to release pigeons. But we were here to simply relax, eat and drink!

I worked on the Saturday and drove down in the afternoon. The northerners drove down and we met for dinner at ‘The Beaver’- gorgeous view our over the estuary, nice food, and we luckily managed to escape before the decidedly dodgy entertainment….

The weather on Sunday was a little mixed, but we ventured out and had a lovely Sunday lunch at ‘The Quay’. Roast beef for Mam, pan fried hake for Marie, and roast chicken for me. Washed down with a cold, crisp rose- a good start to the hols. We hit the little crafty shops of Appledore and bought some fantastic items- the shops here are superb, and staffed by really enthusiastic people who seem to genuinely care about the crafts that they are selling. I am still quite jealous of a candle holder that Marie bought, despite having made some fab purchases of my own!

I was on dinner duty and here’s the kitchen which is mine for the week: 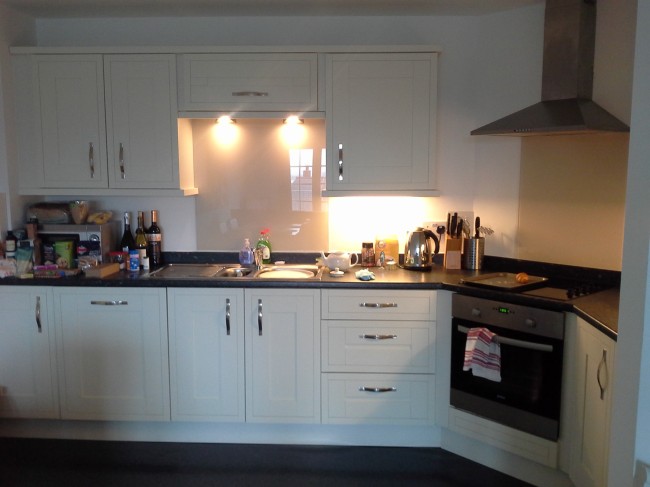 I decided to make a lasagne. It was interesting to hear from the other girls how they make a lasagne, and you quickly realise that we all make a slightly different variation: all tasty, some with bacon, some with mushrooms, some blue cheese, some parmesan. For tonight I have gone back to the standard lasagne I first made as a student- starting with a sofritto, beef mince, lots of fresh and tinned tomatoes, and a large glass of red wine (and a glass of prosecco went in to as it was going spare!). Baked in the oven slowly it came out very well, if I say so myself. 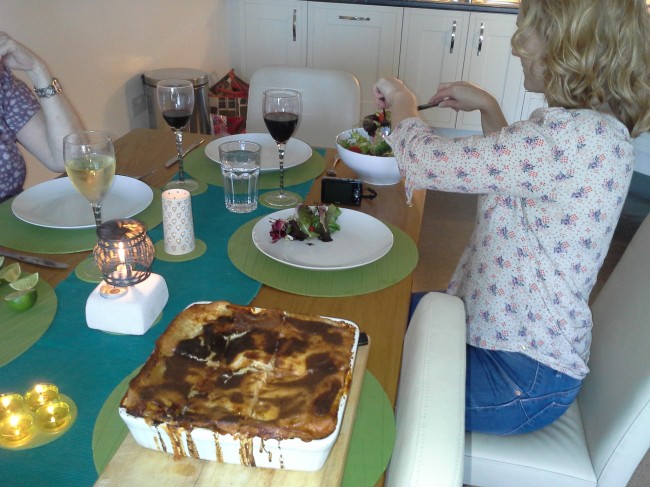 On Monday morning my body woke me up early ready to go to work!!! So I made best use of the time by getting up and making some strawberry and apple muffins (recipe on 18/19th May2013).

We had a great day out in Bude. A walk on the beach followed by a lovely lunch at ‘Life’s a Beach’: Mussels for me, Mackerel and blue potato salad for Mam and a juicy sausage and onion baguette fro Marie. We then hit the shops and spent a small fortune on, among other things, door knobs (an obsession from the northern girls!), foot stools, mini drawers, candle holders. We could have spent double the amount, but exercised restraint in the end.

For dinner I bought some lamb chops from a butcher in Bude as they are Mam’s favourite. I simply grilled them in the oven and served them with spicy smashed chickpeas and balsamic caramelised red onions, with some asparagus especially for Marie (she had had a weird dream with asparagus in it…)

On Tuesday we headed to the beach as the sun came out- heading slightly north to Croyde. What a lovely beach, a surfers paradise, a little piece of seaside paradise I think. And what a delight for lunch- ‘The Sandleigh Tearoom and Gardens’. This is a National Trust café and the garden is beautiful, sitting amongst the flower and vegetable beds. 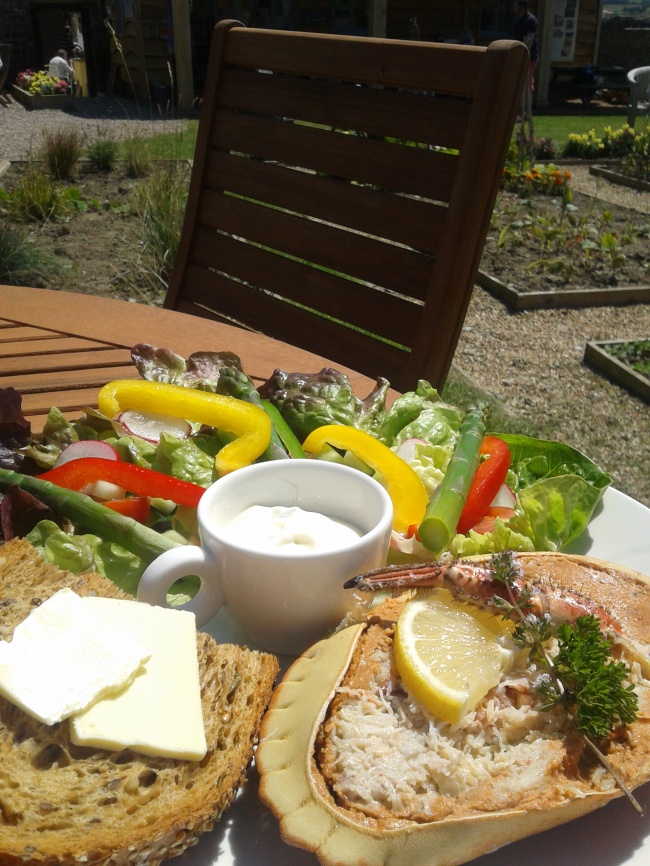 The top picture is Marie’s lunch- dressed crab salad. Mam also had crab in sandwiches. The fish was so fresh, well seasoned, and the bread and salad accompaniments were light and tasty. My lunch is the bottom picture- smoked trout with horseradish cream, and it was delicious. I had not realised how well the 2 ingredients would go together, a match made in heaven, and one that I will recreate once home.

For dinner I made some puff pastry tarts: one with spinach and feta, and one with red onion and goats cheese. Hit the spot nicely.

Wednesday was the last day of the girl’s together as Colin made the 6 hour train journey across to join us. Before he arrived we spent the day pottering in Instow and Bideford, before having a lovely cream tea in ‘Susie’s Tea Rooms’ in Appledore. A little more shopping was done in Appledore, revisiting some items we couldn’t make up our minds on Sunday! I then hopped in the car and picked Colin up from the tiny station in Barnstaple, from a train straight from the 80’s!

For dinner we walked along the harbour to the ‘Seagate’. Recently renovated the inside is crisp and clean. 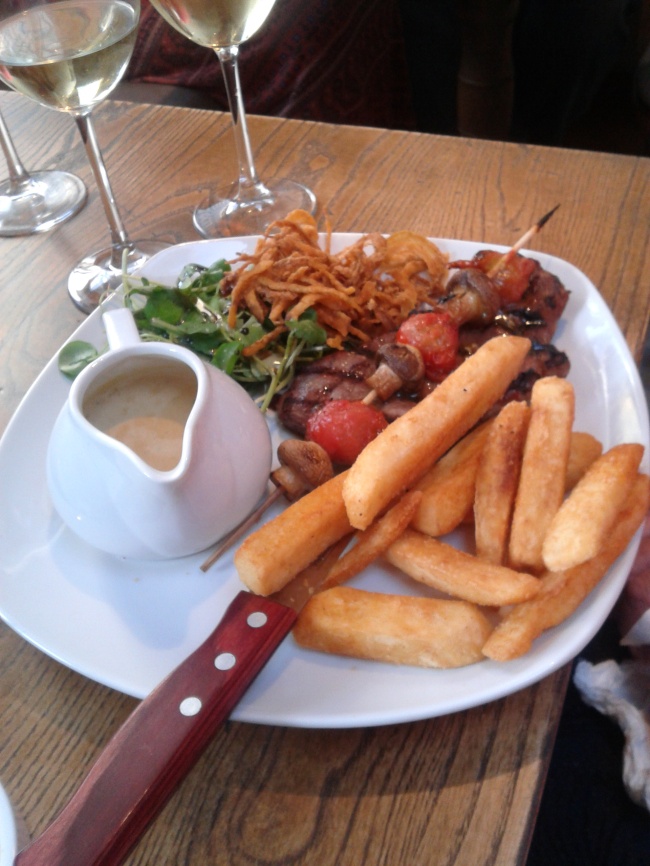 Mam ordered the steak which came with some good looking fries and a peppercorn sauce in a groovy little jug. The mussels were for me and were in a Thai green sauce, and juicy, plump and very filling. Marie had some smoked Haddock on polenta, while Colin had some pan fried sea bass.

On Thursday morning we waved the northern girls off for their mammoth journey home and we headed to the beach in the sunshine! Back to Croyde in fact as Colin had never been there and I thought it may be his first opportunity this year for a float in the sea. We headed back to the tea rooms for a cream tea- a very superior cream tea I might add. The scones were light, the strawberry jam was soft set and tangy, the clotted cream delicious, and, as a great twist, a small pot of very ripe, sliced strawberries. I don’t know why I have not thought about using fresh strawberries before, it adds a different dimension which compliments the cream tea perfectly.

For dinner a spaghetti bolognaise. We have caught the sun and slept like babies.

A couple of years ago we had a holiday in north Devon and made a trip down to Padstow where we had a great lunch and floated in the sea on a lovely sunny day. So today we headed south in the car, despite the mist and rain! 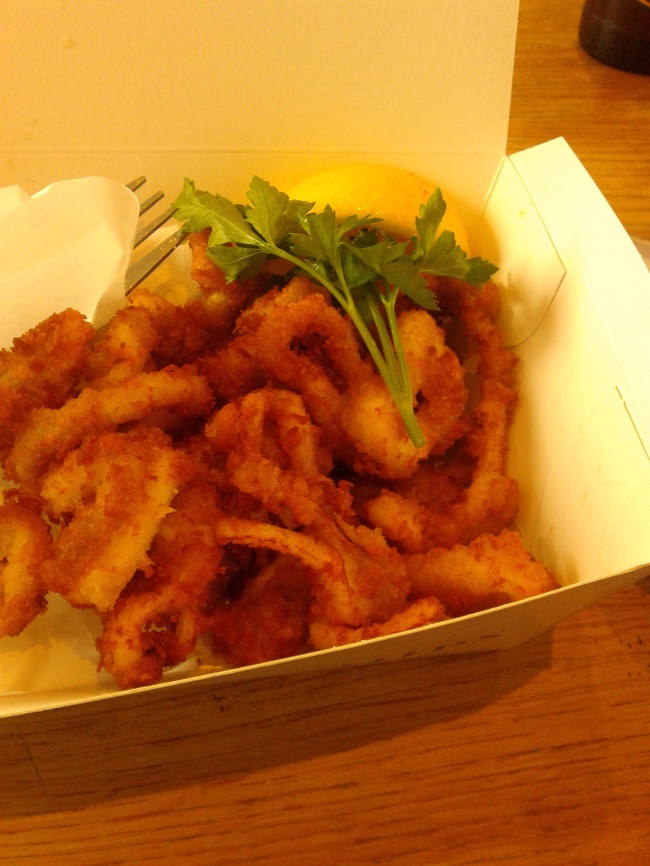 Colin had the Haddock and chips whereas I went for squid. It was lovely, but I have to say that it was a little chaotic, a bit over priced, and potentially over playing the brand. You could say the same about the whole of Padstow in fact. So we headed back, via the Padstow Farm Shop.

For dinner we had some chilli burgers we had visited the farm shop for – their speciality. They were quite tasty, not subtle, but did affect sleep as they burnt away through the night!

We are off home tomorrow, driving via south Devon to visit Riverford. How quick the week has gone, it’s flown over. I will now have to start the count down to our Tuscany trip in September!